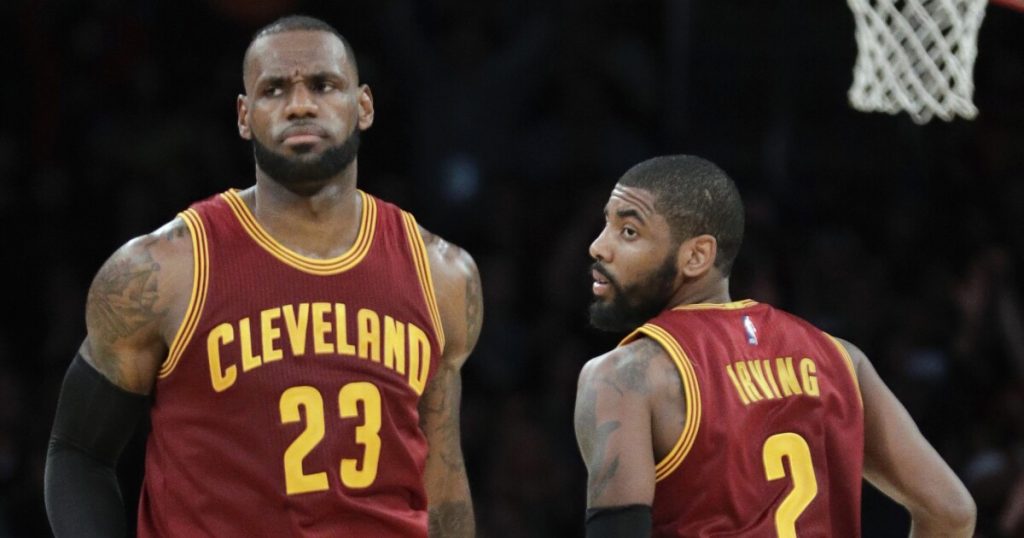 Thanks to New York City’s updated COVID-19 regulations, Kyrie Irving finally entered Barclay’s Center to attend a Brooklyn Net’s game. Unfortunately for the Nets, Irving appeared as a spectator and could not step on the court to contribute to Brooklyn’s 110-107 victory over the New York Knicks. Until last week, proof of vaccination was mandatory for the fans to attend a match at the arena. The mandate was lifted. However, another regulation about working in the arena requires the home players to be vaccinated to play.

Nets fans and NBA enthusiasts are furious over Irving not being allowed to play at home because he was not vaccinated. Fans and players were enraged about the rule not being applied to the visitors. An unvaccinated opponent was allowed to play while Irving was forced to cheer for his team from the crowd. Thus, Kyrie Irving’s Nets teammate Kevin Durant and former Cavaliers-teammate Lebron James supported Kyrie and deemed the decision as nonsensical and ridiculous.

Why Is Kyrie Irving Not Allowed To Play At Barclays Center?

Irving could not feature in any games for the Brooklyn Nets at home this season because he is not vaccinated for Covid-19. Fans and the team have missed its All-Star MVP Point guard at home. The frustrations for the Nets peaked after Sunday’s game when Irving’s arrival at the arena gave rise to controversy during the televised games.

The brewing controversy over Irving’s appearance has reflected a lot of attention on Mayor Eric Adams. Adam replied to a scoffer who asked about Kyrie’s appearance in the Nets team for Sunday’s game during a public appearance. The mayor told that Kyrie could surely play if he gets vaccinated. What seems to be a lapse in decision-making is drawing a lot of eyes to Adams, who recently took office in January.

Kevin Durant Addresses The Mayor Regarding The Confusing Vaccine Mandate:

Kevin Durant targeted New York city mayor Eric Adams during a postgame interview. He also added that the mayor was looking to get some attention with the move. The Nets Power forward said, “It’s ridiculous. I don’t understand it all.” He added that the updated mandate from Mayor Adams did not make any sense. However, Durant was hopeful that the Adams “will figure it out soon.” He urged Eric to figure out a way for unvaccinated players to play in a building full of unvaccinated people. Kevin also told that Pretty much everybody in the world is confused at this point.” And sometimes, it can look stupid.

LeBron James Tweets “Common Sense Is Not So Common”

The Lakers superstar and Irving’s former Clevland teammate LeBron James were not pleased by the incident. He revealed that Irving being allowed in the arena and not playing made “Zero Sense.”

James and Irving have been one of the best duos the NBA league has ever seen. James returned to the Cavs for the 2014-15 season after four seasons with the Miami Heat. Kyrie and LeBron, along with Kevin Love, led the Cavs together to three straight finals. The Cavaliers won their first championship in 2015-16 with LeBron and Kyrie on their side.

Further, Cleveland traded Irving to Boston Celtics in the 2017 offseason. Kyrie remained at Boston for two seasons before moving on to Brooklyn Nets. The Nets fans would be hoping to see the skilled Point guard playing again for them at the Barclays Center soon.