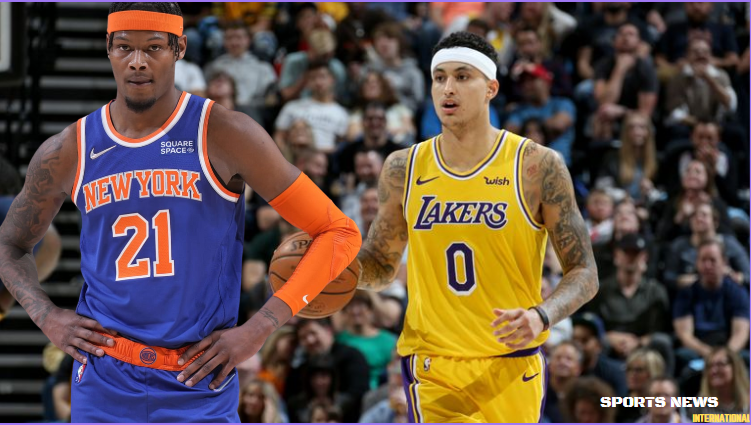 The Los Angeles Lakers are the buzz when it comes to trade rumors in the NBA. They are constantly linked with the New York Knicks to trade the younger players of the Knicks. It looks like the Laker’s front office has finally started taking the trade much more seriously as the trade deadline approaches. Meanwhile, the deal between the Knicks could involve the exchange between the younger and the older player.

This whole season has been a tight spot for the Lakers due to their bad start to the season. Even though they are finally catching up, the speed of late booming has made it difficult for them to rise. Apart from the bad start team lacks in many aspects of the game, which makes the team even weaker. One such example has been a horrendous display of shooting from long range. Even great players like LeBron have also suffered from the three-pointer drought. However, solutions lie in making sound trades that will strengthen the team further.

Can the Lakers And Knicks Make A Deal

The Lakers have gone through some amazing improvements in the recent games, but those were just temporary. If the Lakers wish to latch on to the postseason, they would require some solid solutions to their problems. And to put an end to some shooting trouble, the Lakers are in conversation with the Knicks. Although all the trade talks centered around Russell Westbrook previously, it looks like he might have more role to play at Crypto Arena. This time the conversation about trading off is about Patrick Beverley.

The starting point guard for the Lakers has not been the most lethal player on the court. However, Bev is famous for all the intangible qualities he brings to the team. According to Michael A. Scotto, even the New York side is interested in going for the trade. Meanwhile, Cam Reddish is also a hot property in the market that the LA would want to close on. But it looks like anything about the 23-year-old forward will be an issue at hand after December.

LA Linked With Many Players To Trade

It looks like the Lakers have completely changed the direction of the Russell Westbrook trade. Thanks to his brilliant off-the-bench performances, the point guard became the fan favorite in just a few games. The front office was in conversation with the Chicago Bulls, but they were direct in refusing their interest in the deal. Menwhile the Lakers have also shown interest in Kyle Kuzma of the Washington Wizards and Bojan Bogdanovic from the Detroit Pistons.

Kuzma could be a great addition to the Purple and Gold, as he is putting up the best career numbers this season. The 27-year-old is averaging 21.3 points, 7.7 rebounds, and 3.6 assists in 27 games this season. Although Kuzma could find his new home in Los Angeles, he was eyeing a significant pay increase for his next contract. Reportedly the forward is looking for a 20 million-dollar-a-year contract. If the Lakers could negotiate, they could bring Kyle home.