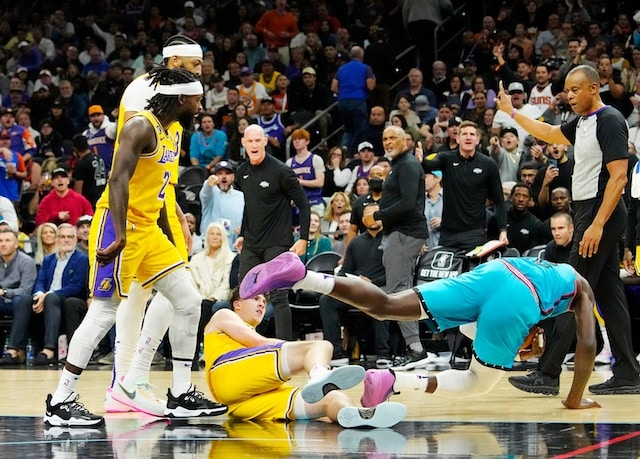 The Los Angeles Lakers played an action-packed game with the Phoenix Suns on Tuesday night. Even though the squad faced defeat, the match had restless moments. There were some incidents that led to an uproar among the players on the court. Patrick Beverley was in the middle of the action and was eventually sent off to the locker room after the incident.

Westbrook Appreciates His Lakers Teammate For Having Team’s Back

The Lakers broke their winning streak against the Suns, losing 105-115 on the night. However, all the attention went to the incident where Patrick shoved Ayton in the game. Apparently, Devin Booker and Ayton were constantly eyeing Austin Reaves, who took the floor after a foul. And Beverley did not the like the idea of his teammate getting stared at by the opponent. Pat is not the star player who stacks up points and has impressive stats for the team. Instead, he brings intangible assets to the Lakers, which gets the team going in a time of need.

However, Pat’s actions were indisciplined, and he was immediately ejected from the court. After the game, Russell Westbrook was asked about the shove in the post-match interview. The eight-time All-star responded quickly by saying, “He loved it.” He continued by saying that the feeling that the teammates have got each other’s back is an important part of the team.

This statement surprised many fans as Pat and Russ had a long-term beef until the two joined forces in the Lakers. The decision to end the beef shows how smart the point guard is for resolving things between the two which have been ongoing since 2013.

Heach Coach Not Disappointed With Patrick Defending Other Laker

The head coach, Darvin Ham’s side, snapped their winning streak with a record 5-11 in the league. However, the major incident of Patrick Beverley became the spotlight of the match as the 34-year-old shoved the opponent to protect his teammate. Even though Lakers coach Ham agreed that it was a bit of line, he was defending his teammates. He told the reporter that it is an emotional game, and things get heated during the game. The point guard will face some consequences, but the team knows they have got each other when one falls.

According to Darvin Ham, this would send a subliminal message to other teams in the league that the Lakers stand by each other. Nobody could just come and mess around with the players in the Purple and Gold. Although the incident was indecent, Ham is not mad because the team displayed unity in the game. The Lakers will put the ejection behind them and focus on the next game against the San Antonio Spurs on Friday. With LeBron James making a return and Anthony Davis’s monstrous form, the game will be the most anticipated for Hollywood.

Share. Facebook Twitter Pinterest LinkedIn Tumblr Email
Previous ArticleLeBron James Got Nostalgic About His Groin Injury And It’s Effect On His Game
Next Article Lakers Squad Have More Depth Without LeBron James, Capable To Turn The Game Without Him